By now pretty much everyone knows dressing up in blackface (r) or as a racist caricature of a culture isn’t an okay Halloween costume. There are a billion less hateful ideas out there so really there’s no excuse to show up in one of these tired tropes! But one question I see floating around this time of year is whether it’s okay to dress as a goth or a lolita (or any distinct fashion subculture) for Halloween?

There are some truly lamentable pre-packaged costumes labeled as both available. Most people interested in lolita fashion know the crumpled mini dresses in the costume shops aren’t part of the style, and every goth has sighed at the “goth kit” makeup on the shelf. There’s a difference between a sloppy un-loving costume of either subculture and using Halloween as a way to try out a new style or push the limits of your own.

When I was 17 and had just heard the word “gothic” for the first time (please bear in mind I am an old lady) I created my first gothic outfit for Halloween (I told everyone I was dressed as a vampire). It felt so good and right it ended up becoming my style for well over fifteen years, and even led me to begin a clothing label! If someone had told me dressing up in a gothic ensemble for Halloween was insulting to the culture who knows where I’d be.

This is just my opinion but I think Halloween is a good excuse to test out extreme versions of our favourite fashions or to try out ones we wouldn’t be able to otherwise. It’s a chance to push the boundaries of what we like and maybe find something that feels much more “right”, that we wouldn’t have without the safe outlet of calling it a “costume” for one day. For example a girl who dons casual Lolita most days might take Halloween as her chance to try out guro or ott sweet! Her intentions aren’t cruel, they’re about self expression- the same way they are the other 364 days.

Cultural stereotypes promote racism and hatred, contributing to a long history of violence and stupidity- while dressing like a Goth for the night doesn’t harken to quite the same complicated and awful past. That isn’t to say I don’t understand where the irritation of goth-costumes comes from (make fun of us on the street but dress as us for Halloween?!), it just doesn’t have the same cruel reality as a racist costume does. 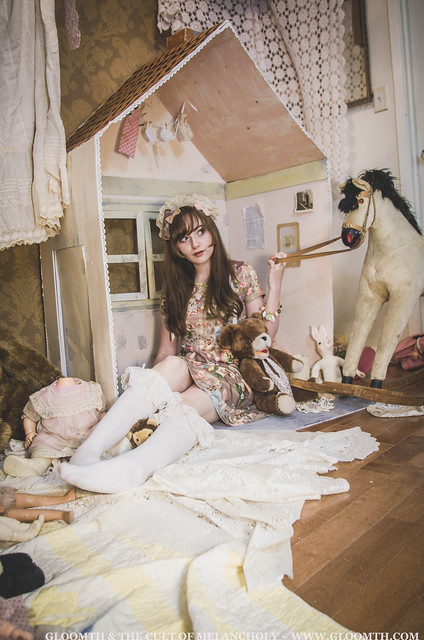 Everyone in alternative attire has received the tiresome “it’s not Halloween yet” comment from strangers. I always want to reply “Oh MAN you should see what I wear on Halloween! This is NOTHING!”.  😉

So in short- yes I believe it’s okay to dress as a Goth or Lolita for Halloween if you’re doing it to express an interest in the style or to explore it and not as a mean joke. Avoid packaged costumes labeled as subcultures and try to enjoy playing with the style! People are always going to think unique outfits are costumes, it’s the only frame of reference they have for such things- so just enjoy yourself this Halloween!

How do you feel about people dressing as Goths or Lolitas for Halloween? Does it bother you? Do you think it negatively effects the subcultures on whole?

2 thoughts on “Is It Okay to Dress as a Goth or Lolita for Halloween?”