The Victorians celebrated death in ways we don’t today, from their truly elaborate cemeteries to creating a myriad of symbols used on tombstones to describe the deceased. Before parks and recreation areas were common people used cemeteries to picnic in, they were considered leisure areas. With childhood deaths and incurable illnesses so common many folks found comfort in visiting their deceased loved ones and picnicking with them as though they were present. Less the silent, mournful experience we now associate with graveyards. The Victorians transformed cemeteries into lush parks where their dedication to mourning and preparing for death were celebrated by the living (as seen in the photo below). 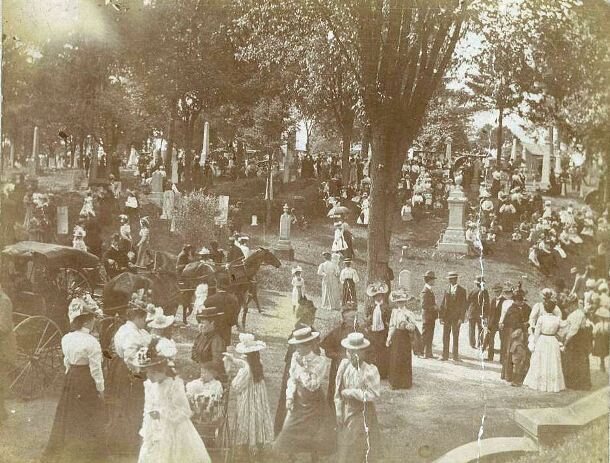 Recently we did a photoshoot in a beautiful cemetery near my home. Before you launch yourself onto the outrage-wagon about creating “aesthetic” photos in a cemetery, please remember that the way we use spaces has changed- cemeteries weren’t always considered a silent, grim place. Whether you think it’s acceptable or not to take photos within a cemetery in 2019 is a matter of personal opinion. I believe as long as you are respectful of the space and the stones, avoid mourners, and are not taking sexualized photos it’s fine (and has long been a tradition in Gothic culture). Highlighting the beauty of these places reminds us that death is a part of life, that it’s important to preserve history and remember those that have passed. This particular cemetery is often full of joggers and dog walkers, is it worse to use a “mourning” space as your gym or dog toilet than as a photo backdrop?

I also wanted to showcase some of the beautiful Victorian era graves in this space, and talk about the symbols on the stones themselves. Our new “Tombstone” dress borrows from these symbols in the print on it in fact. I’ve always been fascinated by mourning culture and cemeteries, it’s amazing it’s taken me this long to design a dress around grave art!

Many of the stones in this cemetery feature floral motifs, thistles often represent Scottish heritage. An open rose blossom (like on the Higgins stone above) represent hope and beauty, whereas rosebuds or half open blooms indicate a child or someone who died quite young. The gorgeous child angel statue on the grave in the top photos is clutching a bouquet of half open flowers.

In the photo below two shaking hands are depicted above the inscription itself. These hands refer to God welcoming the deceased into heaven, or a goodbye to the loved ones left behind. In the example above both hands appear to be wearing masculine cuffs, but sometimes these are shown with a woman and a man’s hand (like in the example below)- in those cases it usually refers to the marriage of the deceased (eternal holy matrimony).

Weeping willow trees symbolize mourning and sadness, and appeared in a lot of death related art of the Victorian era. Often carved into a woman’s gravestone they refer to the saying “she is in her willows”, as a woman mourning for a lost husband or partner.

You can see the rest of the photos from this series on flickr!

Much thanks to Cyberpixie for modeling for me!

Grab her gothic Victorian mourning dress right on our site.

One thought on “On Taking Cemetery Photos”