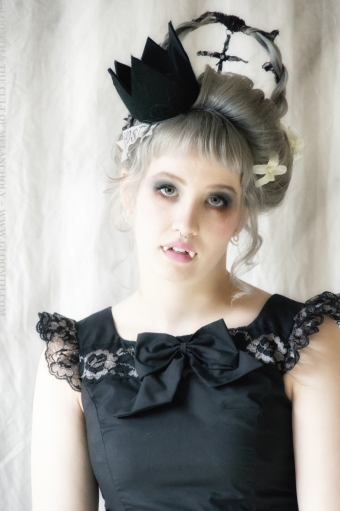 The makeup for our Ghost Story collection launch photoshoot pulled from an array of sources of inspiration! My intention with the styling was to keep it away from looking “costumey” or typical- even though the models were portraying ghosts with vampire fangs. Hoping to still create a ghostly feel to the models’ looks.

The first thing I knew is that I wanted to use these vampire fangs we got from Party City. They’re a really cheap set but they look pretty great in the photos I think anyway! They set with little waxy beads you heat in hot water and then stick inside the fang cap and onto your teeth. The problem with using fangs in a shoot is keeping the styling away from Vampire Costume Stock Photo territory…. 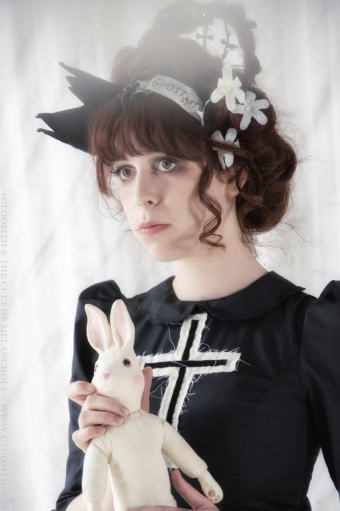 What do Vampire Costumes usually use for makeup? Blood red lipstick and super black eyeshadow. So I avoided those. I kept the lip colors in this shoot girlish and pink. Sandra Sina is wearing Obsessive Compulsive Cosmetics lip tar in “Grandma” (my all time favorite of all the shades of theirs’ I have tried, but I think now discontinued) and CheshireCat is wearing Kat Von D’s liquid lipstick on “Rose Blush”.

I was super inspired by the coloring of these dolls for this shoot! So that’s where most of the eye makeup came from. I used a lot of grey and light-black shadows on the models’ eyelids and a mix of reds and browns under each eye. Finished with small individual segments of lashes for a little extra oomph. I just cut up sets of cheap fake eyelashes to create those.

For the hair I brought on our favorite hair-wizard Savija Ellis! Here are my original sketches for the hair concepts for this shoot. I wanted to create something inspired by Victorian hairwork wreaths- which I am particularly obsessed with lately- but still wearable and very Gloomth. Of course Savija did an amazing job turning my concepts into an amazing style!

The models’ hair was first put up into loose Edwardian updo’s and then braids were wired into the arches above their heads. These were intended to evoke the shapes of the wreaths. Then crosses made of fake hair, salvaged lace, and other bits were added.

We finished the hair with some Ghost Story banners I made from old fabric and crowns created just for us by the House of Pomegranates!!!!!!

So that’s what went into creating the makeup and hair style for our Ghost Story line. 🙂