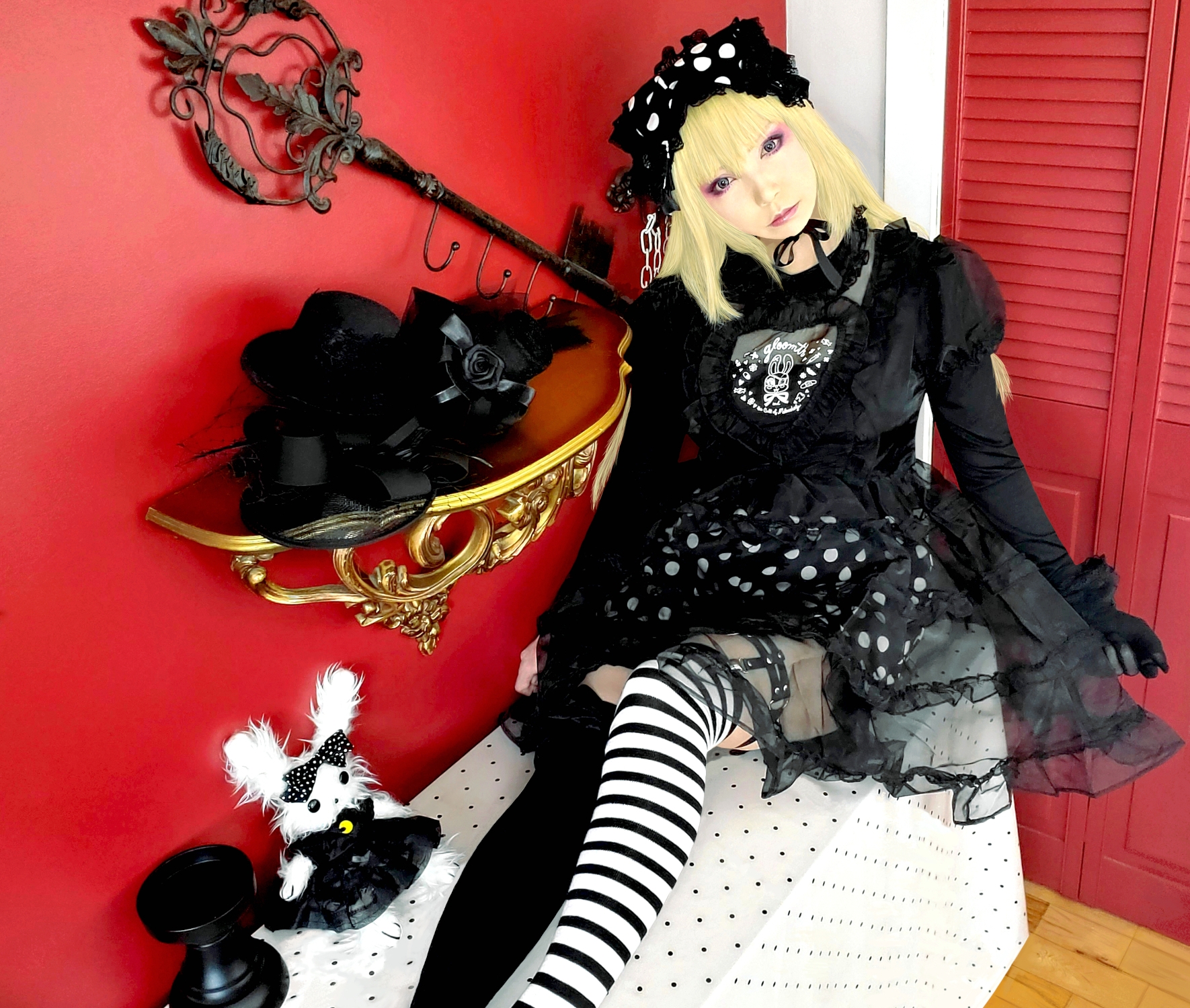 Moon Kana is a Japanese musician, singer, model, clothing designer, toy-maker, and artist- she’s also a long time inspiration for my own design/photography work with Gloomth. There are some of her modeling photos from the “Gothic & Lolita Bible” that I probably could still draw from memory. When I had the opportunity to speak with her about her career and aesthetic for our blog I was beyond excited!

Moon Kana also graciously modeled our “Black Licorice” dress with her own handmade bloomers and her bunny doll friend! Vinegar (our bunny doll mascot) was excited to see another professional bunny-doll-model and is taking notes for future shoots. 😉

How would you describe your aesthetic?

I make music and clothes out of the small remaining light within the darkness.

You’ve been featured in so many Japanese street fashion magazines, how did that begin?

Actually, I just felt music was as important as fashion to me, and the offers came, so I just went with it.

What is it like modeling for the Gothic & Lolita Bible?

It was fun, I was free to choose and make the clothes I wanted.

How would you describe your music? How did you begin creating and performing? Were you interested in music from an early age?

I’ve made rock songs and punk songs, but in the end, I want to make the best music I can using my voice. I knew from 13 years old that I wanted to become a singer, so I started looking for an agent and got discovered in Harajuku at 14. I was making my own songs at 15 and playing in live houses by 16 and in-store lives when I was 17, before releasing my first album at 18.

I started learning the piano at age 6 and I remember wanting to become a piano teacher when I was 12 years old, so my love for music is very old indeed!

You just released “Tsuki no Tokei”, tell us a little about this song? Do you produce all your own tracks?

“Tsuki no Tokei” (The Moon Clock) is a song about time.

I made it thinking about the time humans are given to live.

I produce my songs and make all the mixes.

You’ve had a long career in music already! What’s next?

I want to continue to release singles until I can complete an album.

We hope to see you perform in Canada once the pandemic eases up!

Yes, I hope I can perform in Canada soon as well!

You have toured many countries with your music, what was that like?

It’s always such a happy feeling to have my Japanese lyrics sung by non-Japanese people, or to be told that they’ve liked my music for more than 10 years… I’ve always felt that even though the languages might be different I stayed connected to people’s heart all around the world and I love that.

Is there a favorite place you have visited and performed? Any fun stories from being on tour you would like to share?

I went to a Gothic party in a castle in Germany, where all boys and girls were wearing gothic clothing and it was fun, I liked that atmosphere.

When I sing the song “Usagi”, in the chorus I repeat the word for “bunny” many times (usagi in Japanese), but I change it in that country’s language, for example “lapin” in French or “conejo” in Spanish… People singing that chorus part together with me in their language is always a fun experience.

Tell me about the rabbit toys you make! We also have a bunny toy mascot named Vinegar who appears in all of our photoshoots. You make the bunnies yourself correct? How did that start? Do they have names?

Your Bunny mascot Vinegar is cute ♡ All my bunnies are handmade.

I felt lonely to go on stage alone and sing so I brought a panda that I had made with me the first time and this is how it started. I then started making bunnies by matching them to their outfits. Each one has a name of their own, but collectively I call them the Moon Usagi by Moon Kana.

I think Canada is much more fashionable than Japan with tattoos. I think it’s cute, even though I don’t have one at the moment.

When did you move to Canada?

*Thank you to Moon Kana for participating in this interview and for inspiring us here at the ‘Cult!