The word Angel evokes images of white feathery wings, blush pink skin, and heavenly choruses of boring as heck looking folks in draped robes with halos. The word is derived from old Latin and Mycenaean roots of “messenger” or “mounted courier”. In Christian tradition they are often seen as God’s intermediaries. Angels are described as flawless beings who descend from heaven to act out God’s plans with mortals on Earth. They’re a common theme in fine art, especially since almost all of Western art was commissioned by the church for ages.

I worked on an over the top angel themed shoot this week so it seemed a perfect time to highlight some of my favorite angel themed paintings from over the years as inspiration! 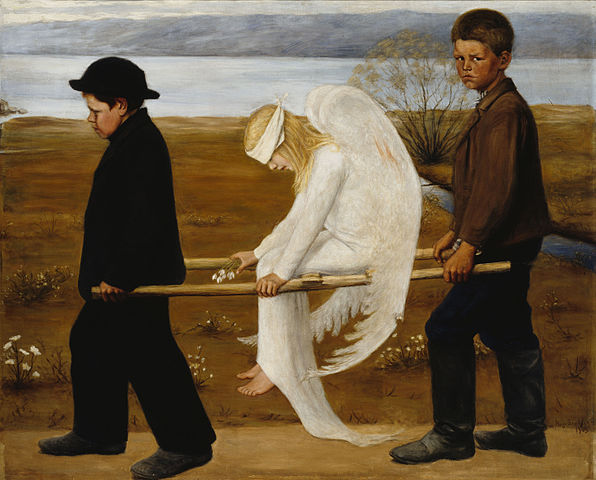 “The Wounded Angel” by Hugo Simberd is Finland’s national painting. I love the colors in this piece and the narrative it presents. Unlike most angels this one is depicted bloodied and bandaged, carried by two young and somber lads.

“The Annunciation” by Jan Van Eyck is one of my all time favorite paintings. It was painted in the mid 1400s and the expressions on both the angel and Mary are delightful to me. Here he is telling her she will bear a child for God and her response seems so bored and dismissive. “Yeah sure I will, dude, right”.

His angel in his “Crucifixion and Last Judgement” piece has some incredible multicolored wings, he’s also standing on top of a skeleton at the mouth of Hell. Bad ass!

“The Birth of Venus” by William-Adolphe Bouguereau is how most people see cherubs when they imagine them, flying against a blue sky and blonde haired and chubby. I also enjoy the shell-trumpet guy sitting behind Venus playing what is probably Wonderwall…

We’ll have our own take on this classic theme appearing on the blog soon!