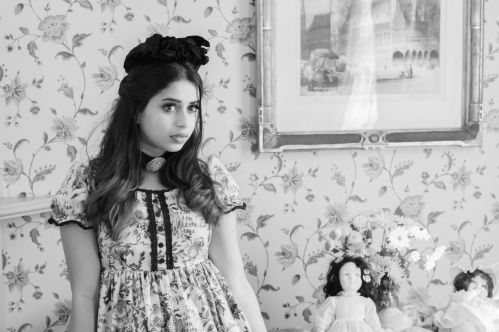 Bonnets appear in lolita and historically-inspired fashions time and again. Primarily associated with the Victorian era bonnets were worn from about medieval times forward, and fell out of fashion towards the end of the 19th Century. They still sometimes appear in modern times worn by members of religious groups who have strict codes for women regarding “modesty”.

Bonnets usually covered the back of the head and tied under the chin, whereas hats sit atop the head. Ones without brims (like the one worn by Ashavari in that top photo, and the velvet one right below) were meant to be worn indoors. Other styles had stiff extended brims which protected the wearer from the sun and sometimes were lengthened to shield them from the gaze of strangers when out in public (cough Victorian codes of behavior for women being awful cough). 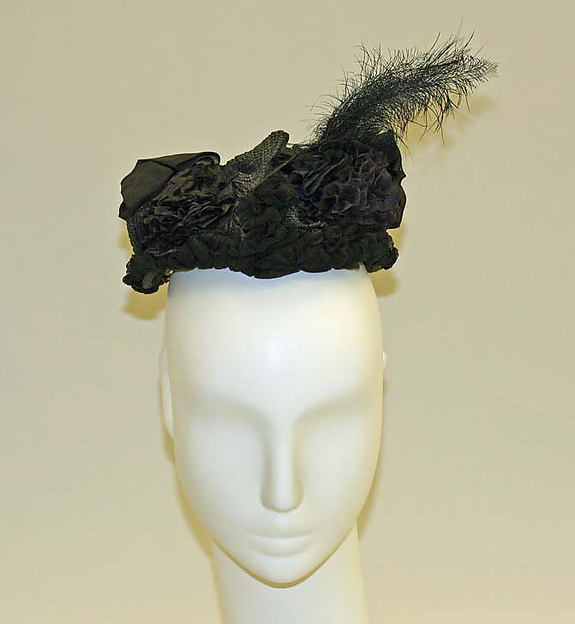 Bonnets were made for a variety of purposes and occasions, often adorned with flowers, feathers, and ribbons. Lower class women wore simple straw bonnets to keep sun off of their faces while working, whereas higher class women wore delicate elaborate bonnets to indicate their social standing and modesty. 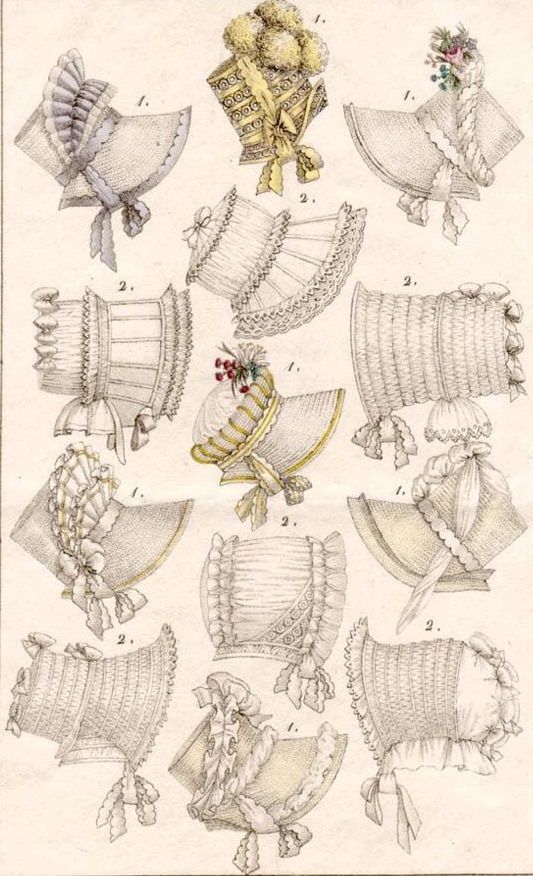 Below is a black silk mourning bonnet, worn in the late 1800s these would be paired with all black mourning clothing- which was worn when a family member had died for months or even years (or in Queen Victoria’s case- the rest of her life). The wearer’s hair could be tucked up and hidden inside the back of it. 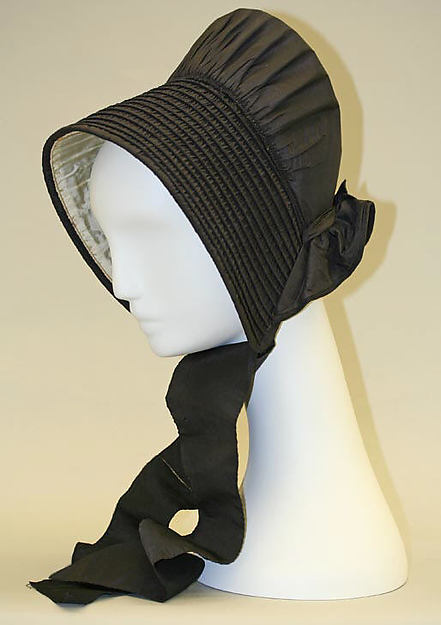 Below is a photo of a fancy floral bonnet which would have been worn by a woman who clearly wasn’t toiling in the fields every day. Dripping with springtime details it was likely made for a formal event or wedding. 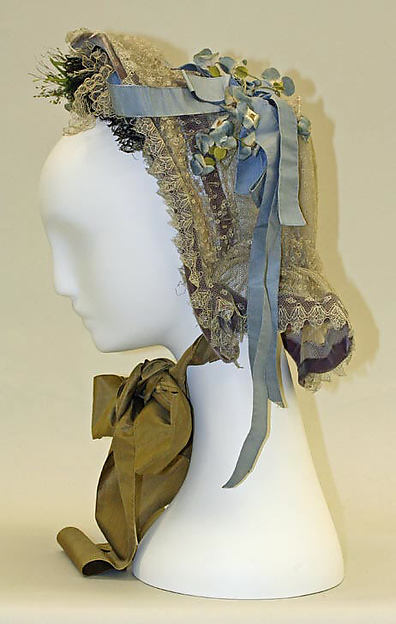 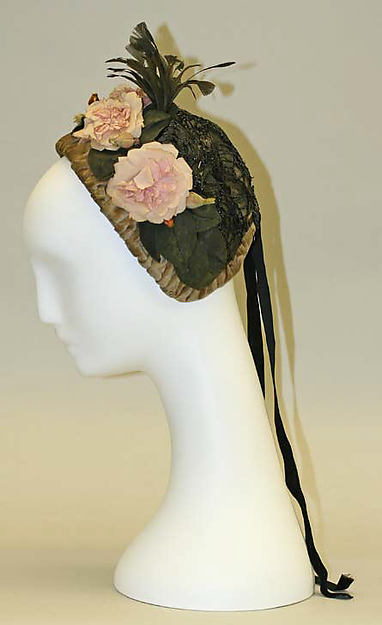 The indoor bonnet above has no brim and is beautifully decorative. The trend for extended brims continued on to the end of the 1800s, with some having been lengthened so far that the wearer’s face could only be seen by those standing directly in front of her. “Poke Bonnets” with the absurdly long brims were meant to shield the wearer from the view of strangers, thus limiting women from interacting with others. 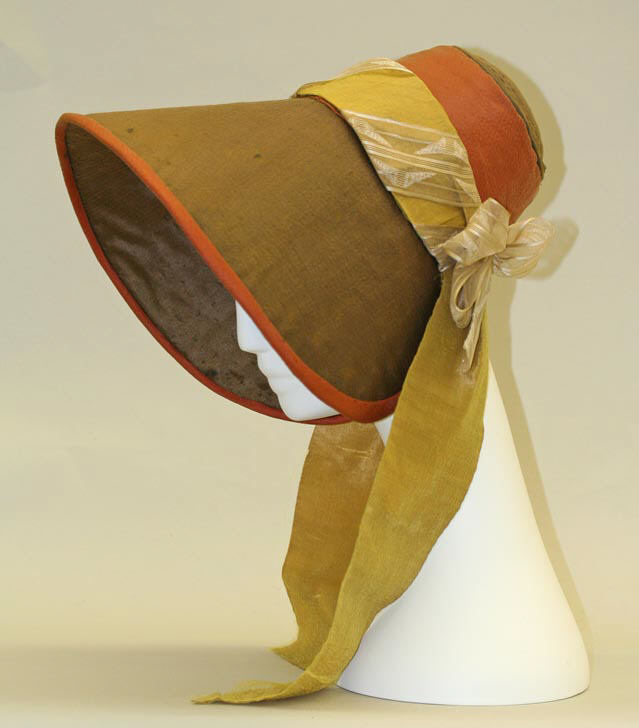 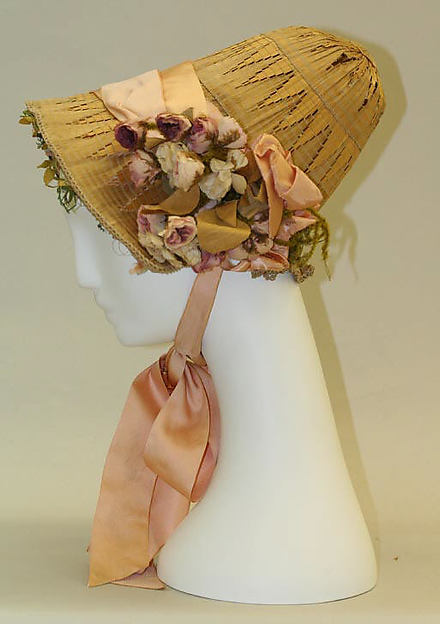 “Coal Scuttle” bonnets (below) had wide brims and flat backs and were popular in the 1850s. This style eventually fell out of favor alongside the Poke bonnets since they both concealed the wearer’s hair entirely. 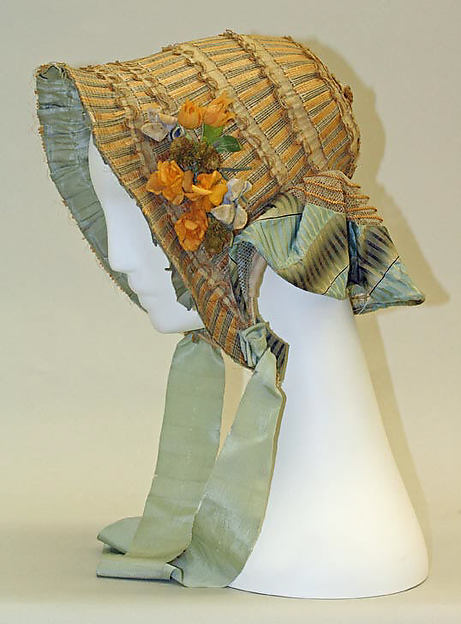 Bonnets (and much of the stuffy codes of behavior that inspired them) largely went out of fashion to be replaced with all sorts of other hat styles. Today when worn with lolita or historically inspired outfits they add a touch of antique beauty and propriety to your ensemble.