We had the honor of collaborating with the gorgeous ReeRee Phillips again recently, and it seemed like a great time to ask her some fun interview questions! ReeRee modeled our “Ghost Queen” dress for us remotely and the photos are absolutely beautiful and eerie!

How did you first discover gothic or alternative fashions?

After my parents split and my father went back to Germany, I spent the ages between 5 and 11 going back and forth between my Grandfathers care and my mothers care. My two uncles, who are avid metal heads, were teenagers and they got me into the heavier, darker music from the age of 5. They often babysat me, introducing me to their band members, their music and their friends who were 90s goths and metal heads, and fell in love. My mom also began dressing more ‘vampire’ inspired goth during the mid 90s, so I was surrounded by people who were very different and broke the mould of small town Australia.

Do you remember the first item of “gothic” clothing you owned or loved?

It began with an Iron Maiden shirt, which was a hand-me-down from one of my uncles. I still own the shirt and wear it regularly!

I didn’t get to choose clothes often as a child, as my mom was in a tough financial situation and my father was in Germany finishing university. We relied on hand-me-downs and thrift shop clothes, but this is where I began dyeing clothes and sewing. It wasn’t until my father moved back to Australia that I had a bit more access to alternative clothing, and he encouraged my alternative style. 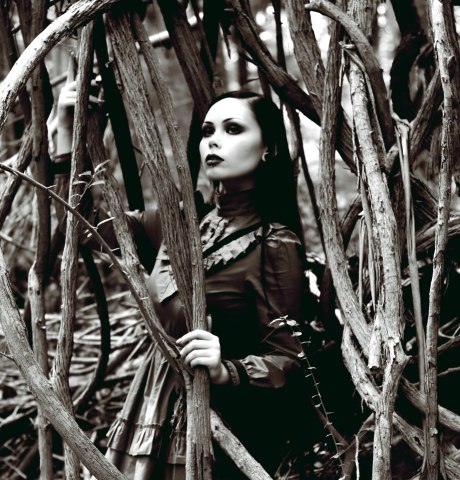 You are widely known for being an incredible gothic model as well as creating gorgeous makeup tutorials and lookbook videos, are there other talents folks maybe don’t know you have?

Thank you! Some talents people may not know about? I am very artistic, so I feel like painting, drawing etc doesn’t count as that is expected of me.

I am a great cook. I have a knack for throwing together experimental dishes, based on my sense of smell. I also can fix cars, thanks to my step dad being a mechanic and teaching me various things about engines. I also played AFL (Australian Football) and represented my city. Its a full contact sport, so I think people also don’t expect that of me.

What’s something you would like to learn to do or if you could pick one thing to suddenly be an expert at what would it be?

Or dance. I can ballroom dance (thanks to my Grandfather, he taught me how to Waltz, Foxtrot and Polka), but I fell in love with Irish dancing after seeing Riverdance as a child. I used to have it on VCR tape (old, I know), and attempted to copy. Attempt being the key word!

Has being a mother changed the way you approach your style and self expression and if so in what ways? A lot of our fans/customers/models are parents and there’s something very magical about seeing families with “alternative” members, this sort of thing just wasn’t very visible when I was a kid and it makes me super happy to see it now!

When I first found out I was pregnant, I was just 17. I had this idea that I had to give up everything alternative, and began trying to change myself to fit in with the other parents around me. After almost 18 months of doing this, and a mental breakdown, I cut off all my hair, shaved it, and started to live my true self. I got internet for the first time in 2012, joined social media (my hair had grown back to just below my shoulders) and it opened me up to this whole new world and I saw that there were other people out there like me who were parents. I felt more at ease with myself just knowing I wasn’t alone.

How accepting is Australia of alternative appearances and lifestyles? Canada has definitely become more embracing of “weird” people but in the 1990s we had much of the same “Santanic Panic” the USA had here, so unique folks were often associated with risky lifestyles and negative qualities. This has definitely changed since about 2000, culture has become more accepting of unique appearances. Has the general response to “alternative” appearances changed in Australia the way it has here? If so why do you think that’s happened?

Just before I was born, there was a famous killer in my state called the ‘Brisbane Vampire Killer’, who the media attributed her crime to being ‘Goth’. So there was a huge panic here too. I was oblivious to this until I reached high school and became aware of this. It didn’t deter me, but I did get a fair bit of abuse because of the way it was seen.

My high schooling finished as the ‘scene’ fashion was becoming popular in the mid-late 2000’s and was often lumped in to a category with them. I was ridiculed regularly in high school and sometimes, they got physical with me. Lots of pushing around, rumours and people throwing stuff at myself and my friend group. It seems to have changed in the last few years though, I am noticing more alternative kids at schools, so this makes me happy.

What would you say to someone new to exploring “alternative” styles or hoping to get into modeling them? Is there advice you’d give your younger self today if you could go back?

Confidence, baby. Just be confident in yourself, your style. The best thing about alternative modelling is that there is NO discrimination about height, gender, sexual identity, race, religion, etc. There will be people who will say otherwise, but Goth and Alternative at the bottom line is supposed to be inclusive.

Advice for my younger self? Stop trying to be likeable. You will alway come across people who don’t like you for one reason or another. You spend too much time worrying about everyone else.

You mentioned working on music! Can you tell us a bit about that?

I’ve been song writing since I was a child. Poetry in music has always felt like the most natural form of expression for me. I am working on turning some of the songs I have written over the last few years into a musical vision of mine. I’m having difficulty with direction, as I have so many musical interests from metal, to dark wave, classic rock, goth rock and everything in between. I am reaching to a more dark electronic with heavy base-guitar lines for my music, as I feel it fits with my song writing better. I write about my feelings, and turn it into a third person narrative of a parallel character to express what I feel, what I have been through. I’m hoping to release at least one song this year, but I work two jobs and finding someone to help with my music projects has been quite difficult.

If you could film a Youtube video or shoot anywhere in the world where would you go? Are there locations you are dying to shoot in?

Anywhere but Australia. I love Australia, but I’ve been here most of my life. I would ideally love to shoot in Iceland or Canada. I love snow, I love the cold! 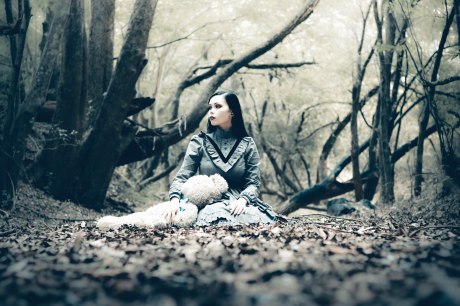 Thank you ReeRee for modeling our dress and answering all of our questions! 🙂

You can check out her work on: