Kuroihitomi was one of the first models Gloomth worked with! She’s back to modeling with us after a hiatus and we couldn’t be more excited. She has a very sharp sense of humor and manages to get us all laughing at every shoot. We’re posting interviews with our models over the next while so you can see how terribly clever and fierce they all are.

How did you get started modelling? How long have you been modeling? Do you consider yourself a “professional model”?

I got started through a friend who used to model with Gloomth and it just sort of took off from there. I’ve been modeling since 2008 and other than a few shoots for personal friends, I’ve been solely working for Gloomth.

How did you choose your Gloomth model nickname?

Kuroihitomi is actually my Japanese name. A long time ago, I wanted to be a Japanese translator and I decided that I needed a name that really represented me as a person. I chose “kuroihitomi” because it means “beautiful, dark eyes.” In no way does it have anything to do with any anime because I don’t actually watch anime. I prefer traditional Japanese culture. If you’re interested, it’s written as follows:
黒い眸

Tell us about the craziest photoshoot you’ve ever participated in! Any silly mishaps?

The craziest photoshoot I’ve ever done was the car wash photoshoot. We were on top of a parking garage in the blazing sun, with waterguns. The poor security guy was so confused (even though we were allowed to be up there, I don’t think it’s what he expected). At one point, I burnt my bum on the car because I had to sit on top of the car and black paint, plus bare skin is a definite ouchie. Overall, it was a lot of fun.

Oh wow…that’s tough. There have been a lot of amazing outfits over the years. I think the Iris dress is still one of my favourites. I also really like Sorrow, Mourning Glory and Victoria. It’s really tough to choose! 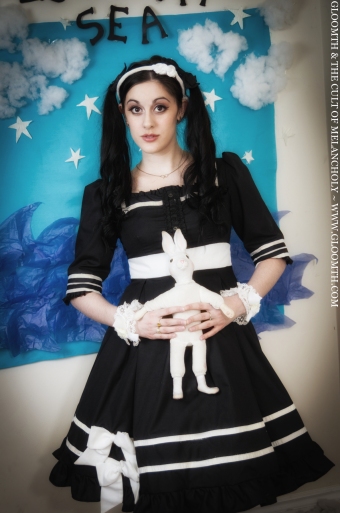 What do you do outside of modeling?

Outside of modeling, I’m in school for nursing. I also make little crafts of my own, and when I can find the time for it, I love to volunteer and help others.

How would you describe your personal style? Do you prefer to dress up or be a slouch?

My personal style is somewhere between traditional Goth (think Siouxsie Sioux) and Lydia (Winona Ryder) from Beetlejuice, often with little bursts of colour (usually on my legs).

What five things do you have with you in your bag/purse/whatever at all times?

If you had a marketing slogan or tag-line for yourself what would it be?

What do you spend most of your online time doing?

Homework usually. Haha. I also play League of Legends and Star Wars: The Old Republic, and of course, waste time on Facebook.

That’s really tough because a lot of movies follow the same formulas…I’ll give it a shot though.

Lost in Translation – I’m sure some of you will be shocked by this, but I find it incredibly offensive to Japanese culture and I feel like the main characters make it seem okay to blatantly rude to people because of cultural differences.

Memoirs of a Geisha – sensing a theme here? This novel was written by a white, American man. On top of that, all of the characters in the movie are Chinese. If I were watching a movie about China, I would expect Chinese actors, but it’s not a movie about China. The story in itself is filled with historical inaccuracies and the man who wrote the novel revealed the name of the geisha he interviewed when he
wasn’t supposed to. I highly recommend her book for anyone interested in Japanese culture and history – “Geisha, A Life” by Mineko Iwasaki

The Phantom of the Opera – as someone who saw the original Canadian production four or five times when I was a child, I’m very picky about how each of the characters is portrayed. I felt like the characters just weren’t captured at all in this movie and it was really disheartening.
Where else can we find you online?

Thank you to Kuroihitomi for answering our silly questions! 😀