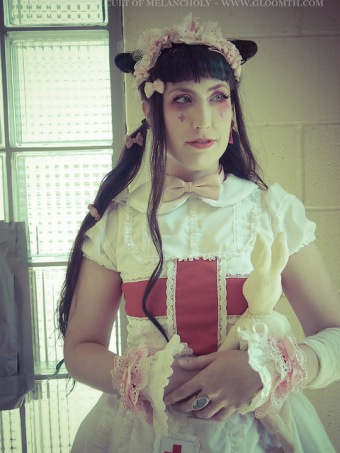 Recently I did a shoot with Hexcelle and I had a lot of fun creating a Menhera inspired look for the series- blending Menhera elements with our own adaptation to make something entirely Gloomth!

Menhera is a fairly new subculture and one that seems to be popping up everywhere lately. Even Angelic Pretty has released a hospital themed collection this spring that would work well with the aesthetic. It’s an interesting subculture as it has developed from something negative. For many playing with these motifs and themes in their outfits is a way of transforming the negative stigma of being unwell and sick into something beautiful and affirming.

To understand the style it’s important to look at where the name itself came from. Menhera as a term originated in Japan as slang referring to a type of (supposedly) bothersome, attention-seeking girl with mental health issues who frequented a BBS 2ch group for those suffering from emotional issues. Menhera as an insult referring to a specific subculture is not disimilar to the way some people use terms like “tumblr girls” or “emo” to negatively refer to a type of person, or how some react to anyone wearing alternative clothing and claim they must be “sick” or “crazy” to dress like that. 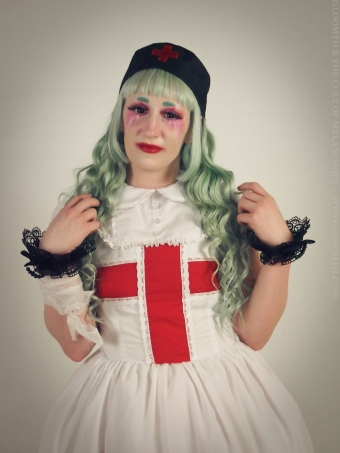 Menhera has evolved as an aesthetic associated with “mental healthers” and hospitalized, delicate sick-girl styles. The style movement is thought to have begun with designer and model Kuua Oyasumi and the aesthetic has spread like- well- crazy. It’s often lumped in beside Yumekawaii (soft cute pastel styles) and Yamikawaii (darker underside of cute aesthetic and suffering/hospital motifs) and is only now branching off into it’s own independent subculture.

Found at the intersection of cute and sick, think pastels and hospital themes with sharp black elements. Glitter bandaids, rosy sick-girl byojaku cheeks, pseudo bondage straps, and artfully created fake blood stains. Menhera also plays with the assumption that anyone alternative is somehow flawed emotionally or “screwed up” and “sick”. Turning typical insults lobbed at alt-folks into a badge of honor. 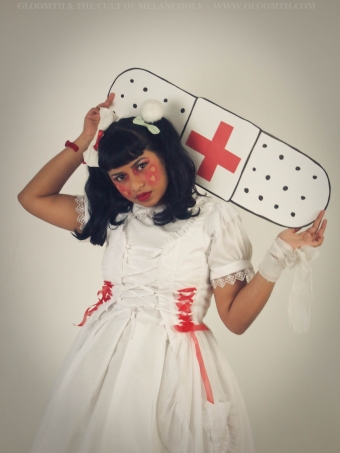 There are plenty of articles out there breaking down the exact “formula” for a Menhera outfit but that’s not something we really put much stock in- so we won’t be citing those here. Subculture styles evolve and change constantly, designers pull from these aesthetics to blend with their own, and often those who began the styles will shift their focus to other looks. While self appointed gate-keepers police participants’ attempts at the style. To us it’s “right” if it pulls from the concept and is recognizable, it’s fashion not math, relax and have fun with it. The imperfection (wabi-sabi) and creativity in building these types of styles is what makes them inspiring an awesome.

For Gloomth’s take on Menhera we used the idea of a sick-girl reclaiming her bad experiences through exploring her aesthetic, her clothing is a reflection of her true self, an armor against the day. Inspired by her hospital room, physical wounds, antique medical tools, and the glittering mirage of her dreams.

There’s a lot of talk of how the media and subcultures glamorize mental health disorders, and it’s fair to an extent- media tends to portray depression and suicide as beautiful, wistful experiences when these things destroy lives and families (while plainly ignoring all the unpalatable/unflattering “extreme” disorders like schizophrenia etc). Depression isn’t a sad gorgeous girl staring out a window into the rain, or a pale waif falling from an open window into the night etc. It’s often ugly and self destructive and quiet, it’s antiseptic smelling hospital hallways and crumbling friendships, it’s ugly scars you carry your entire life. It’s dying a thousand times in your head every day while telling no one.

However I do think there’s a sort of power that can be gained from owning this suffering through aesthetic exploration. Illness, hospitals, and medical themes have been common in Gothic and club-kid styles since the beginning (see club kid icon Michael Alig’s “Blood Feast” birthday party for example) and to me the use of these themes was about embracing one’s fucked up existence. The world already thinks we’re “crazy” so why not own that? For me using themes associated with depression/hospitals was like reclaiming them, acknowledging mental illness is a part of me and accepting it. Turning it into art.

I don’t think Menhera is responsible for the garbage view of mental health our culture possesses or feeds it, but can be used as a way for sufferers to explore and reclaim their experiences. Either way it’s a really fun style that’s quite easy to work into your own looks.

Some additional sources on Menhera:

History of the word menhera